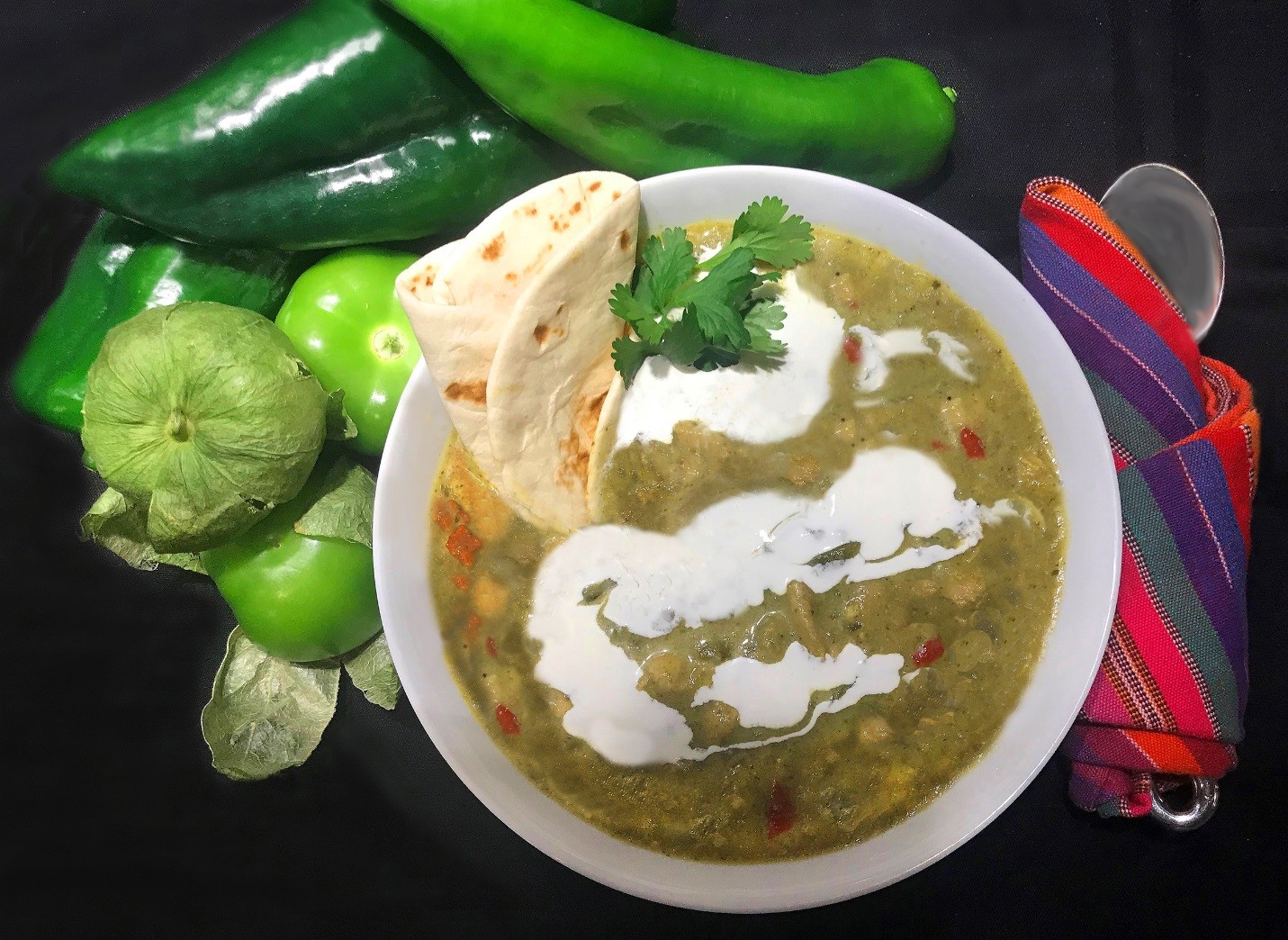 Make your own Sonoran Chile Verde using my healthier-than-dining-out version. You can also make it gluten-free with a few substitutions.

1. Chop four roasted chilies, set aside. Add the remaining chiles to a food processor or blender with the tomatillos and ¾ of the cilantro, including stems. Blend until smooth. Chop remaining cilantro; set aside. 2. Toss pork with 2 tbsp. flour and ¼ tsp. salt.

3. Reduce heat to low. Add garlic and onions. Sauté 10 minutes or until browned from deglazing the pan. Add 1 cup broth while sautéing to aid in deglazing. Add oregano thru salt and sauté until fragrant. Add pureed tomatillo mixture and chopped chilies.

4.  A tablespoon at a time, thoroughly blend a ¼ cup flour into vegetables. Stirring constantly, increase heat to medium‑high, add remaining broth and bring to gentle boil. Reduce heat to low and simmer 30 minutes.

5.  Add pork to pan and increase heat to medium. Stirring, cook 5 minutes or until meat is heated through. If sauce is too thick, add a little water or broth. Remove from heat, adjust seasonings, if necessary, and serve.

1. Move rack to top position in oven and turn to “broil.” Line baking sheet(s) with foil, put 4 to 6 chilies on each, leaving 3-inches between. Place sheet(s) on rack directly under boiler, leaving oven door slightly ajar.

2. Using tongs to turn chilies, roast/broil until skin is charred and separated from all sides, 4 minutes per side, 12 to 16 minutes total. Using tongs, place chilies in a heavy-duty plastic bag that seals closed. Allow chilies to sweat for 15 minutes.

3. One at a time, remove chilies from bag. Under cool running water, peel each chile. Slit chilies using your finger and pull out veins, stems, and seeds. Set aside to drain on paper towels before using in recipes.

1. Traditional Chili Verde is made with pork shoulder which is higher in fat, so this version is made with pork tenderloin—a leaner cut of meat. Because it’s leaner, it cooks faster. So, to prevent overcooking, we sear it and remove it from the heat until the last few minutes of cooking time. This cooking method is quicker and keeps the meat tender.

2. Vegetables vary in the amount of water they contain. Sautéing them at lower heats prevents their natural moisture from evaporating too quickly. This allows them to cook in their own juices and eliminates the need to add fats such as butter or oil to prevent sticking.

3. Rather than using lard or butter combined with starch to thicken the green sauce, I use what I call a “vegetable roux.” A vegetable roux blends a starch—in this case wheat or gluten-free flour—with the vegetables. As with a traditional fat roux, liquid is added to create a sauce that thickens as it cooks.